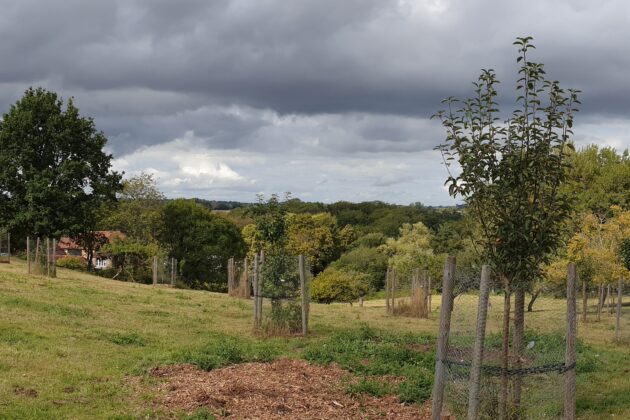 At Duncton Mill at the base of the South Downs near Petworth there is the second National Collection of Sussex Apple varieties planted in the orchard of Sebastian Anstruther, who has over the last few years enthusiastically supported the planting of the apple collection and this year funded the Genetic Fingerprinting of the different varieties.

Using a procedure outlined by Peter Laws of Fruitid and East Malling Services I collected in early May six leaves of 28 of the Sussex varieties. Care was taken to ensure the samples were disease-free and without bruising or damage.  The leaves were placed in numbered plastic bags and temporarily put in a fridge at 4 degrees to keep them as fresh as possible until they were posted off to the  National Institute for Agricultural Botany-East Malling Research (NIAB-EMR) for testing.  The National Fruit Collection (NFC) at Brogdale will then provide an overview of the results which will be published later this year.

There is an introduction to the technology of Genetic Fingerprinting on the Fruitid website www.fruitid.com/#help DNA scheme, which will keep you busy for an hour or so and here is a very basic outline of the techniques used.

All plant cells contain a nucleus that holds the genetic information which gives the characteristics for that plant or fruit variety.  With apples and pears, the entire set of genetic information or Genome is held in 17 pairs of chromosomes held within the nucleus of the cell.  The thread-like Chromosomes contain DNA in tightly coiled structures that form a double helix and it is this which is extracted in the genetic fingerprinting procedure.  Deoxyribonucleic acid or DNA for short is an immensely long molecule that carries all the information necessary for growth in a sequence that is distinct for each species. Genes within the DNA carry the genetic information as well as providing structural stability to the molecule.

Clearly recognisable sections of DNA are used to provide a genetic fingerprint which allows the identification of different cultivars and computer software is used to compare the fingerprint of each sample to all others in the reference data set.  At the National Fruit Collection at Brogdale there are over 2100 reference fingerprints for apple and over 500 for pear.  If a genetic fingerprint of a sample is unmatched it may be a historic or local variety not held by the reference database, or it may be a new seedling that could be given a new name. The NFC recognise that the database is only as good as the data it contains and that errors can occur.

The use of DNA analysis has many other uses apart from cultivar identification. In fruit breeding programmes the parentage of new varieties can be confirmed and improvements made in selecting breeding lines. Errors made in propagation can be resolved and the identification of rootstocks in nurseries made.  Great progress has also been made in using DNA markers to identify the genes that affect fruit characteristics such as fruit acidity and sweetness, skin colour, harvest date and susceptibility to diseases like bitter pit, scab, fireblight and mildew.  These tests can then be used to select varieties for breeding programmes much more quickly than traditional trials which rely on seedling selection.  In the future techniques such as gene insertion could be used to modify the characteristics of varieties.