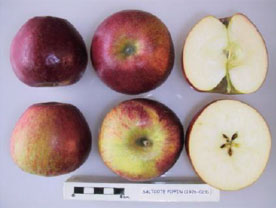 The Saltcote Pippin is a variety cultivated by James Hoad of Rye from either a Ribston Pippin or Radford Beauty seedling. First recorded as a variety in 1918, it was awarded an RHS Award of Merit 1928.

“The Rother at Rye is tidal and used to flood up on the plain to the east of Rye. There were salt pans there which caught the water and then evaporated it to produce salt. They are now playing fields. The salt was then transferred to a ‘cote’ or ‘cottage’ where it would dry. That was the ‘Saltcote.’ ‘The Salts’ is now where the Rye Rugby Club have their ground. The Saltcotes were just to the west, and Saltcote Lane led from the main Rye Road down to the salt stores. The pippin was raised from a seed at the big house, I’m not sure if it was Saltcote Place or the other bigger house at the end of the lane.”

A medium to large, handsome apple, it has a rich, aromatic flavour. It is sharper and not as intense as Ribston Pippin but has a similar rather open texture. It becomes sweeter, milder and more aromatic as it ripens. Flat, rectangular to conic shape. The shape of the apple and the texture of the skin is often uneven. Pale to golden yellow in colour with a orange red to carmine flush with some russeting on the body of the apple.

The fruit can be picked in early October and stored until November to January.

The Saltcote Pippin is a moderately vigorous, spreading tree which crops well.

How to identify a Saltcote Pippin apple

Where to buy a Saltcote Pippin apple tree